Adventure Dad > Adventures! > A Dad Takes Advantage of an Opportunity

A Dad Takes Advantage of an Opportunity

Check out this story sent in by Doug.  Thanks Doug, great job of taking advantage of a unique opportunity with the snow patrol!

Father and Son and First Turns of the New Ski Season

The anticipation was great, our first ski days of the new season. And early this year! With the November snow came a Thanksgiving outing to our favorite Front Range ski area, Copper Mountain. The anticipation may have been greater for me, a fellow Adventure Dad, because of the breakthrough last ski season when my son Jordy, then age 11, became my full and true ski buddy, a fellow double-black-diamond skier. We are not boys for the bumps, by the way, as we don’t seek out and spend time on the many mogul runs that some skiers relish. Rather, Jordy shares my longtime passion for the ‘sidecountry,’ the steep, deep, untracked powder and crud that makes every run and each turn a mystery and wonder to be encountered and conquered. And so, with that mystery on our minds, and the delight in our hearts, Jordy and I took to the lifts of Copper Mountain on the day after Thanksgiving, looking to ski the lines that would challenge our legs and our love of untracked snow.

Although much of the mountain was not yet open, we found some early runs for warm up that held particularly good snow for so soon in a season. Kudos are due to Copper’s crack Ski Patrol for opening so much terrain by late November. Once we had our legs under us, Jordy and I became curious about what else might be open to tempt and challenge us. From the Sierra Chairlift we could see that most of the terrain below was closed, so as we got off the lift, I asked a Copper employee what was actually open. This young man in an orange uniform provided the password to some unexpected and extraordinary early season adventure: DIRECTED SKIING. “If you ski down to that patroller in the red jacket,” he told us, “They may let you in to some runs that are roped off.”

Off we went with haste, not wanting to miss this unique opportunity. We arrived at the first ski patroller perched on the ridge above a series of choice runs, none of which had been opened yet this year, and we asked what was happening. “Directed skiing,” he replied, “Ski down to the next patroller and he’ll tell you where to go.” WHOO HOO! We skied off the ridgeline and into the deep snow, untracked and ready for us to carve are place in the face. Who could have imagined our good fortune to be among the first few folks to gain access to these runs this season?

We waited for direction, noting nearby the huge hole and surrounding grey snow that told of a recent powder charge explosion. Ski patrol was using all of their arsenal to safely open new terrain. We enjoyed a total of three laps on these runs, each involving a new line on fresh snow, each cause for celebration. Our season was off to a great start, and Jordy and I had a great story to tell Maggie at day’s end.

Day two found us back at it, still celebrating our first day good fortune, as we lined up for a ride on the Storm King surface lift that drags one skier at a time up a steep ridge where, when the season is in full swing, many great options abound. This ride was more about the view on a sunny, warm day, and we fully expected that our best option would be an easy cruise back down the ridgeline. We should have known that directed skiing was happening everywhere that weekend, for those brave and lucky enough to stumble upon ski patrol at work, and to venture where no skier had yet been this season. Indeed, when I asked the lift op at the top, he confirmed that ski patrol had entered Spaulding Bowl just 15 minutes earlier, and that adventurous riders were welcome to traverse over and be among the first to make turns in that area.

The first patroller offered concise words of warning: “These are early season conditions – rocks and other hazards may be barely covered with snow, so ski with caution, and be aware.” As so again we made our way into untracked terrain. Me first, as Jordy was a bit hesitant seeing the vast cirque with only a few riders making there way between the red jacketed patrollers who dotted the way down. I savored every glorious jump turn in the steep, virgin fresh, knowing that Jordy was close behind, turning his skis with excitement and trepidation. As I came to a stop at the next posted patroller, I asked her how my son looked coming down behind me. “He’s rippin’ it,” she replied “and only 12, huh?”

The final patroller we encountered warned us to use caution on the cat track that we’d be skiing to exit this area, and both Jordy and I skied in control along the road leading out. Gradually I found myself riding higher up on the left rise of the road, Jordy up ahead about 20 yards, as two other riders simultaneously overtook me at much greater speed. Suddenly I hit a large, concealed rock and skidded to a stop, jamming my arm into the unyielding impediment.

Immediately I scanned my body, focusing my awareness to determine if anything was broken or badly hurt. My left arm ached, my fingers felt cramped, but as I arose from the snow it was clear that I was lucky, and had escaped serious injury. Jordy shouted his concern, “ARE YOU OK, DAD?” and I assured him so as I rolled off the road, under a rope, to compose myself and assess my equipment. Although I blew out of both bindings – a rare occurrence for a telemark skier – the only issue was a broken safety cable, and once I was back into my gear we cruised gingerly down to the base, pleased for another directed skiing adventure, and content to call it a day.

Later, over a plate of barbeque with Maggie and Jordy, I asked my son what he would have done had I been hurt more seriously. “First I would’ve cared for you, Dad, and I would see if your cellphone had service, and flagged down other skiers to help us.” WOW! Perfect, assess the victim, use resources to get assistance, he’s got it, and in spite of a bashed up elbow, sore arm, and stiff fingers, I feel great knowing that my son and I have enjoyed the first great adventure of another promising ski season, together, doing what we love.

Epilog – Our next chance to ski Copper Mountain was on Christmas Eve, and although most of the area was open, and Directed Skiing merely a fond memory for this season, we were again grateful to ski patrol. You see, the Storm King lift was inoperable on this day, requiring the use of a pair of snow cats to transport skiers up Spaulding Ridge. Another unexpected treat was a ride in a cat…but that story is for another time. 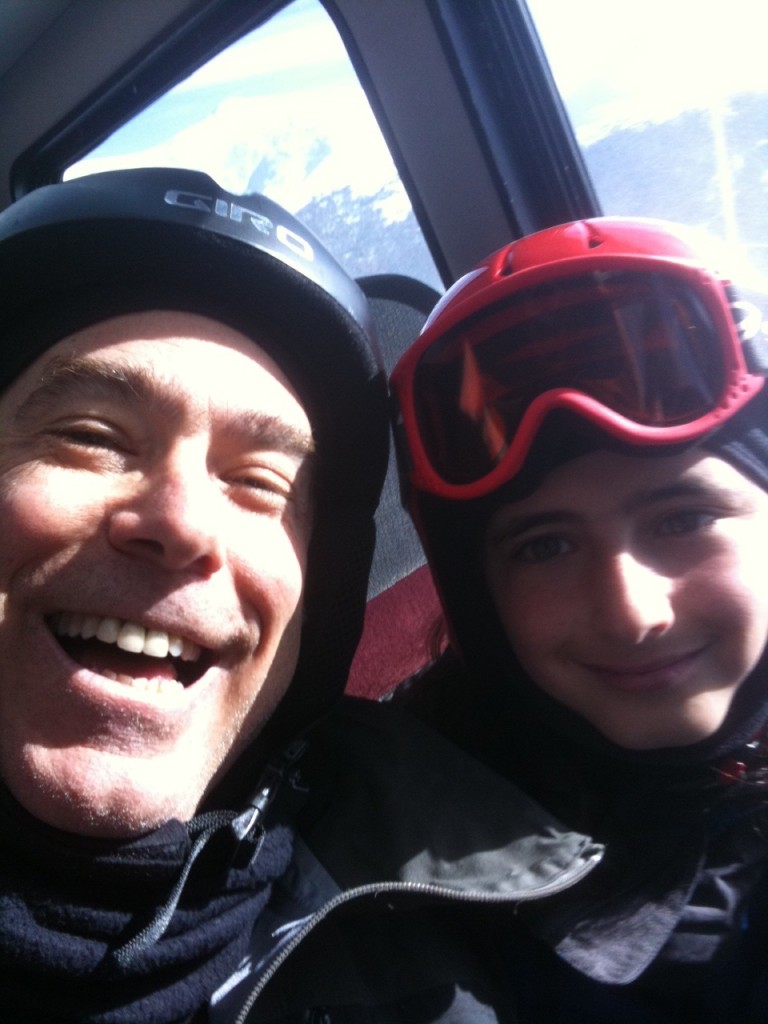 3 Responses to A Dad Takes Advantage of an Opportunity