“It was the best day of my entire life!”

While I am blessed each day by the gratification I receive from what I do for a living, this phrase from one of my ten-year-old group kids was truly special to me.  It was communicated to me by his mother whom he told in the car following our 31st annual Crawdad fishing adventure.  This was an adventure where we shattered our old group record of 38. Now, twelve kids and one mom caught 109 crawdads in about 30 minutes.

Starting out, the majority of our kids had never crawdad fished before and the site of the chicken liver on a string just about made them want to quit before even starting.  Within a minute, however, those skeptical faces turned to smile of pure joy as they started pulling them out and throwing them into the bucket.  Most of them couldn’t believe they were even catching one let alone 5 or 10.

Within minutes, one kid was stripped down to his shorts while another took a header into the creek.  Standing next to each other, it looked like a picture that Norman Rockwell might have drawn.  This was kids having fun in the outdoors in its most pure form.  Having my teen son there to help the kids and fill the bucket with our catch made it even more special for me as I recalled the many times he ran around with his shirt and shoes off and now observed him acting as a mature young man.

Halfway through the adventure, I couldn’t believe how magical the whole time was.  No one was complaining, no one was arguing over who got to stand where, and no one was upset about the 100-degree heat.  All of us were simply lost in the moment.  I couldn’t resist the urge to yell out: “Now isn’t this better than those stupid video games!” 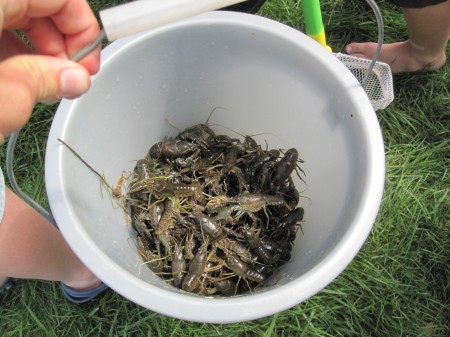 One Response to Crawdads!