Adventure Dad > Adventures! > A Father and Son Bond Down Under

A Father and Son Bond Down Under

Isaac’s “Invitation into a Community of Men” Weekend

It was early Saturday morning December 11, 2010, and I had organised 5 other men to join me… to call my second son Isaac (14 years of age) out of the world of boys & women, and call him into a community of men, as I had done for his older brother 3 years earlier. This was to be just one of the numerous moments Isaac will experience during his 2-year long vision quest, which commenced on his 13th birthday, and will conclude on his 15th birthday with a final ceremony and celebration. It’s his rite-of-passage… the years set apart for him to transition out of the stage of boyhood, and initiated into young manhood.

When it came time to suit up our harnesses for our rappelling adventure… it was evident that Isaac was nervous. To say that he’s not fond of heights is an understatement. But he wanted to go over the edge and down the cliff nonetheless. And so he began. He pushed through his fears, and went over the edge… maybe 1 to 2 metres down the vertical rock-face, before telling our guides he wanted to climb back up to the top, and not continue downward.

Even though he had navigated through the scariest part of any rappelling experience (going over the edge), I knew as his father, I was needed at that moment, to speak against all of the waves of accusation that would come against him. And that’s exactly what was going on within him. He was ashamed that he had not completed the adventure. He wept openly, and referred to himself as a failure. That’s when I spoke truth into him… that he was not a failure… that despite his fear of heights, he went over the edge.

After I had helped him to calm down, I asked him if he’d like me to buy him a Coke. He said that he didn’t deserve it, and so in I went again… to play my part as his Dad… to rescue him, to guard his heart, to speak against the lies with truth. It was beautiful.

I wonder how things would have been had I not been there to interpret what he thought was failing? 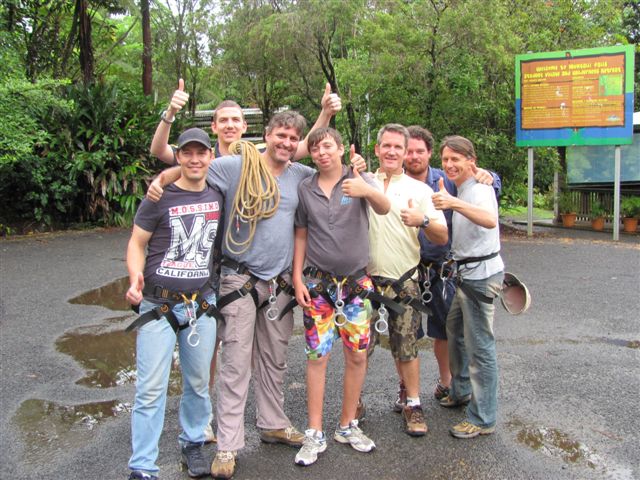 One Response to A Father and Son Bond Down Under